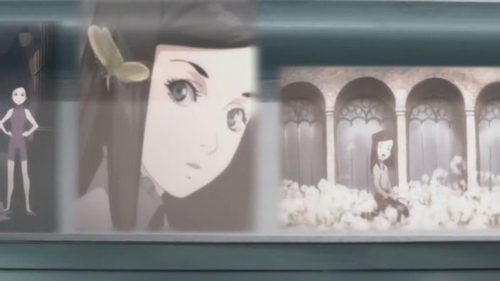 It looks like my assessment of episodes 2-9 of was in error, and there may have been more truth in my original assessment than I had hoped.

Episode 10 of Ergo Proxy pulls away from Vincent Law and refocuses on the situation back in Romdeau. One moment while I go off on a bit of a tangent: The folks whose translation I’ve been viewing, and enjoying greatly, have decided to switch around some of their names. The investigator originally referred to as “Lil Mayer” is now “Real Mayer.” This is how her name appears on various documents throughout the series. The doctor originally referred to as “Daders” is now “Daedalus,” again a change brought on by text that appears on-screen. The city they are from has gone from “Romdo” to “Romdeau,” and while I haven’t seen it on-screen, I presume this again reflects some official romanized spelling from the original creators. It brings up a bit of a problem, though.

When a writer wants to tuck away some little hint about some deeper truth, he can take advantage of the peculiarities of his language to do so. In other languages, these hints lose their subtleties, to the detriment of the story. Take, for example, young miss Mayer’s name. Spoken aloud, it sounds like “Lil,” a western name that is short for “Lilly” or “Lillian” (and presumably others). This is a reasonable name for a character in a sci-fi setting to have. Take the lack of differentiation in Japanese pronunciation between the ‘l’ and ‘r’ sounds, and you can twist this around to have a more descriptive name, “Real,” that implies certain things about the nature of the character. When spoken by a western speaker, the difference is clear. When displayed in text, the difference is clear, the meaning unveiled. For this reason, I’m choosing to continue referring to the lady-with-too-much-eyeshadow as “Lil.” It’s a better name, and calling her “Real” makes one aspect of the story a bit… heavy-handed. Daedalus, which means “cunning worker” and is commonly known as the mythical father of Icarus. Daedalus, as a name, isn’t as directly ruinous of the story, so I’ll be using it in preference to “Daders,” which just looks silly.

Back to the topic at hand. Episode 10 takes us back into the city of Romdeau, where the villainous Raul continues his investigation of the Proxy incident. He confronts Daedalus, there is a great deal of cunning back-and-forth between the two. It appears that both Daedalus and Raul are formidable opponents. Both know the stakes involved, or at least more so than they let on. Both know how to keep a secret, and how to read the inscrutable.

It turns out that Lil is alive, and Daedalus has been more than just her friend; his research has revolved around her and the Proxy named Monad. The storytelling here is a bit clumsy. We had no opportunity as viewers to buy into the idea that she had died, having just seen her stabbed and fall to the floor a moment before the end of the previous episode. We didn’t see any tragic mourning, no drawn-out view of her fading away into death. We seen no funeral, and frankly have no idea that she is purportedly dead until it comes up in dialogue with the seemingly-morose Daedalus. 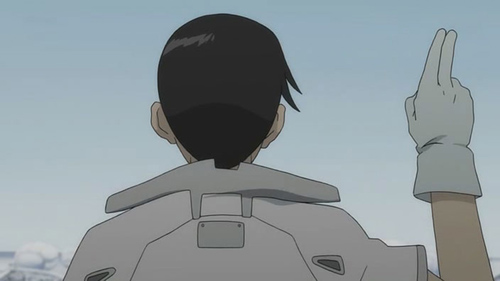 Lil, freshly reunited with her autoriev and very clearly not-dead, wanders through an abandoned post-apocalyptic suburbia still tended by masterless robots. The lawns are immaculate, the streets clean, and fresh newspapers are delivered daily, but there are no people there save Lil. She has a vision of a younger version of herself, and ponders the nature of existence, her raison de etre. Yes, ten episodes in, we get the dark-future musings on the meaning of life. 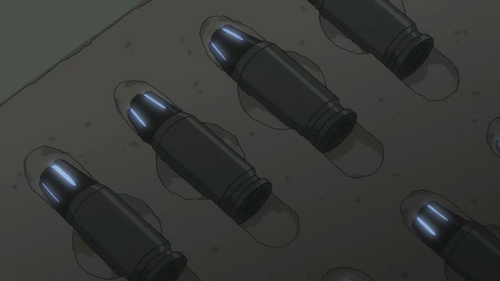 In typical science-fiction fashion, this involves somehow harnessing experimental data gleaned from the captive Proxy to make some kind of super-bullet. Presumably Lil’s existential angst will lead her to some confrontation with Vincent. This confrontation must, by the logic of science fiction thrillers that try to be smarter than they are, involve both parties wrestling with the nature of the human soul, finally coming to a conclusion that will almost invariably result in one of them intentionally getting himself killed. It is the cynic in me that sees Ergo Proxy straying in this unfortunate direction, wallowing hip-deep into the mire of adolescent ennui.