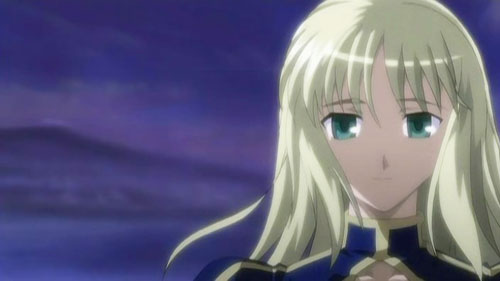 This week saw the release of the 24th and final episode of Type-Moon’s Fate/Night Stay. Spoilers follow.

I’ve been following it since the first episode, but never really got into posting about it with any regularity. Part of this had to do with the proliferation of FSN material on other blogs, and part of it had to do with the guilty pleasure of watching a show that was, in essence, a cross-breed between a Dragonball Z / One Piece / Naruto / Bleach fighting-challenge show and a Tenchi / Love Hina / Shuffle harem show. These are two genres of Japanese animation that are rather horribly overdone, and have produced some excellent shows. The production of additional, similar shows is not necessary to enrich the cultural landscape: this stuff has been done before.

As mentioned before, Fate / Stay Night is about a war between seven mages for a powerful artifact known as the Holy Grail. Each of the seven mages summons a servant, a legendary or mythical figure that will fight on the his master’s behalf. There are seven types of servants, each with differing strengths and weaknesses, but each servant is, more importantly, strongly associated with a “noble phantasm” that can be used to kill the other servants. The Grail War recurs every ten years, and ends when there is only one servant remaining. This time around, we got the following:

Much of the plotline of Fate / Stay Night revolves around Shirou trying to figure out what the heck is going on. There is all manner of backstory, rules, and miscellaneous lore that is imparted to him by Tohsaka, Saber, and others throughout the course of the story. Much of what he is told doesn’t really do him any good. Some of it has the distinct ring of high-fantasy filler. Most of it is pretty interesting, even when it turns out to be not-applicable or patently false (no, it isn’t really the Holy Grail).

This show had a bit of a pacing problem, as there were some phenomenally-intricate discussions going on in the midst of what could have been presented as gripping, desperate, fast-paced battles. Such dialog can be readily accepted in a comic book, but once the swords start a-swinging, there’s little time to discuss the finer points of “Trace Sorcery.” That said, the core themes of the story are held firmly throughout: how do Shirou and Saber deal with their natures as selfless hero-types in the midst of a selfish free-for-all? Shirou cannot abide the idea of letting somebody else get hurt for him, especially a girl. Saber is a proud individual that has been saddled with an uncooperative master. They respect each other’s perspectives, but they’re both rather obstinate, making for some good character interaction throughout the series.
The production value throughout is solid for a television series, though it’s clear that the producers didn’t have the budget or time to make every fight scene play out as dramatically as they would have liked. The battle between Saber and Rider is by-and-large excellent, as are the fights between Saber and Gilgamesh (the Archer servant from the previous Grail War). Some of the decisions about when to burn lots of cells on quality action sequences are befuddling, though; there was a big build-up to the showdown with Caster, but the actual confrontation left much to be desired. 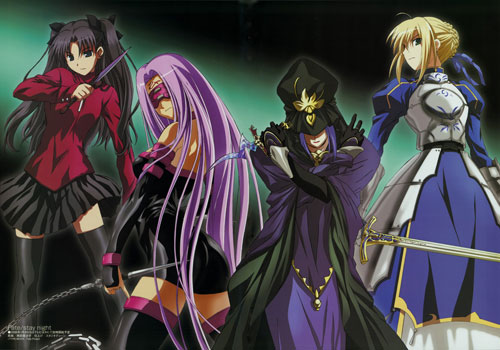 When I first looked at this series back in February, I gave it a B-; I liked the character designs and premise. When I looked at it again in May, this was upgraded to a B+; a good deal of this was in comparison to other shows like Shakugan no Shana, which had some premise and plot-progression issues that I just couldn’t get my head around. Having seen this series run all the way through from the hope and promise of its first few episodes, endured the loss of several interesting characters (only one Servant survives to get the Grail, then disappears), and endured a fair amount of poorly-placed plot-revelation dialog, I’m scaling back my rating a bit. Interesting character designs can only get you so far. The character development was appropriate and even-handed. Several of the fight scenes were excellent, but many lacked pizazz. The obscure mythological references scattered throughout sent me to Wikipedia a few times (Medea? Sure I recognize the name, but she was a classic hero’s wife, not a classic hero herself). Overall, Fate / Stay Night gets a B- as a totally-watchable, good series.