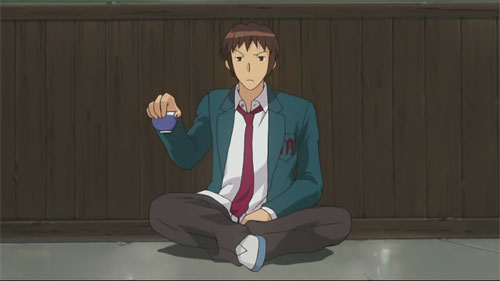 A few months ago I saw an animated GIF on some website. It was a terrified-looking girl in a bunny outfit shooting an AK-47. Clearly it was from some hokey cartoon, and I dismissed it out of hand.

The Melancholy of Haruhi Suzumiya is one of those titles that goes a long way towards validating the often-insipid world of anime blogging and the overwhelmingly-crass world of imageboards like 4chan and iichan. Were it not for sites Blog 好き and the blogs that it chronicles (Anime なの didn’t exist at the time), I would have never given this series a real chance. 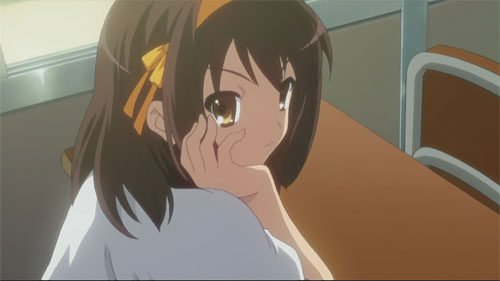 Based upon a book, not a comic-book or video-game, the Melancholy of Haruhi Suzumiya had a lot of potential depth to draw upon from its inception. Add to this some competent voice talent, an excellent production company, and a budget to give them all time to get the job done right, and you get a truly top-shelf series. 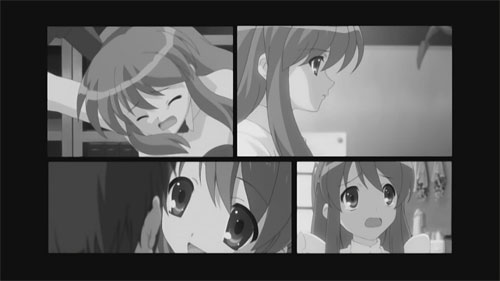 There were some aspects to this series that raised an eyebrow from time to time, and gave some viewers pause. A few of these points turned it into a love-it-or-hate-it experience, and some folks have taken the opportunity to declare it “overrated.” Of special note:

Most other criticisms of the mechanics of this series I consider to be largely groundless. 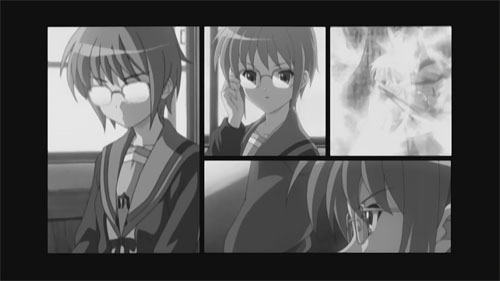 Yuki is the calm foil to Haruhi’s exuberance

The appearance of this show amongst a rather wide variety of anime blogs (the なの / the 好き) was of broad and sometimes deep. The Anime Blog Stock Exchange currently shows it in the number one position, leading its closest competitor by a healthy margin. Unfortunately, it seems that most coverage of the Melancholy of Haruhi Suzumiya has centered around the fanboy-pandering aspects of the show, lauding or lamenting the most recent episode’s choice of fanservice method. A few posts have shown the full gamut of coverage-quality, including a breakdown of the instruments used in episode 12’s rock & roll performance (excellent) alongside a play-by-play critique of the cleavage shots and such (sad) here.

On the positive side 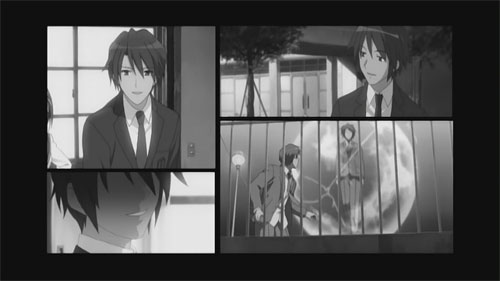 How it holds up 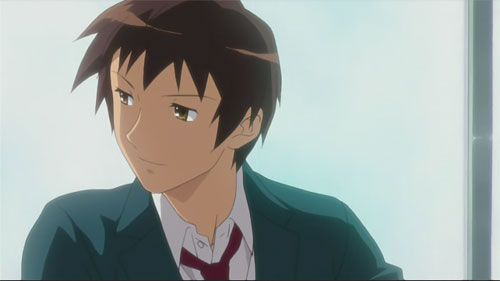 The Melancholy of Haruhi Suzumiya has some ups and downs, some ebbs and flows, and while I always recognized the excellent production value that went into crafting the show, there were times when I held some serious doubts that continuing to watch it would be worthwhile. The characters were appealing enough to keep me coming back for more, long enough to get hooked by the almost-subtle plot hiding behind all the over-the-top silliness of some of their antics. Upon further reflection, I realize that my doubts were largely in reaction to how superlatively-awesome the first couple of episodes seemed; how could they possibly keep it up? Where could they possibly be taking this story? A dip in my satisfaction with the show was inevitable as it shifted from “grab audience attention” mode to “get on with the story” mode.

If you only watch two anime series that came out this spring, make one of the Haruhi Suzumiya no Yuutsu. It will likely stand out as the best series of the year, all told. A+ 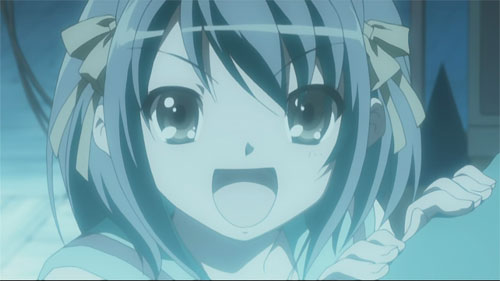 7 thoughts on “Haruhi Suzumiya no Yuutsu”