Got a speed problem? Check that wiring. No, really. Pull out a couple of screwdrivers and go to town. This morning I put on some Curious George to distract the boys, and my useless second line has never been better.

At issue here was some shoddy internal wire work I did while home on a lunch break a while back. It turns out that having a loose contact at the phone box can reduce your stable ADSL2+ line rates by eighty-three percent or so. 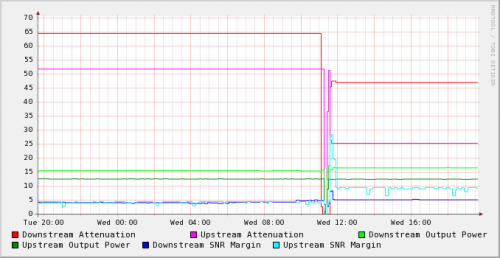 The lousy splice bumped the downstream line attenuation from ~47dB to ~65dB, leaving the circuit extremely sensitive to the RF noises found in the wilds of suburban California. Physically identifying the problem consisted of simply making sure the various contacts involved were firmly screwed down and gently tugging on the wires at an unsightly jellybean splice and at the MPOE. I inadvertently demonstrated to myself that modern fool-proof demarcation point technology is in fact fool-susceptible, provided sufficient foolishness.

The 3mbps line speed shown is the result of having capped my maximum sync rate cautiously, as I’m on a rather long loop from the ILEC’s central office. Normally you’d have to call your ISP to get this adjusted.

4 thoughts on “Check your wiring”