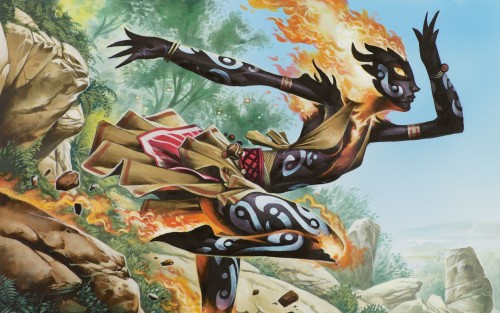 It can’t be helped. They’re putting out more playable races and character options for Type V Dungeons & Dragons. It would be foolish to think they wouldn’t, but we’re about to find out whether they’re capable of exercising a little restraint. It’s expected at least four additional races will be introduced, cribbed from material previously available going back at least to the Planescape setting, the Genasi.

Genasi are plane-touched people, humans native to the various major inner planes of fire, earth, air, and water. They exhibit characteristics that make them better suited for survival in strange worlds dominated by forces hostile to normal life, as well as features that tie them in thematically with their affiliated element. The literal and allegorical natures of air, earth, fire, and water vary tremendously. By some ways of thinking they vary absolutely, which is why they were ever thought of as the fundamental building-blocks of the universe. Clearly they cannot be a single race for game purposes. Most of their characteristics would differ.

Let’s start by taking a look at how previous incarnations of this oddball cluster of player character races worked before. 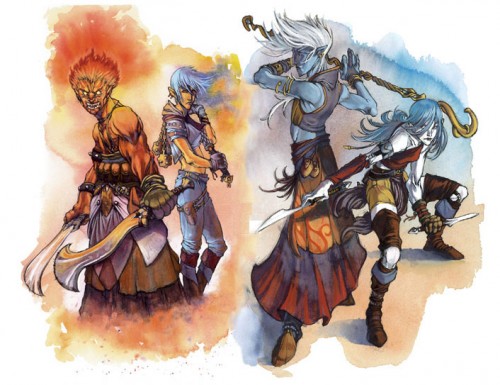 The Genasi of Planescape are the direct offspring of an elemental native (a djinn, sylph, ifrit, dao, etc.) and a mortal, and are exceedingly rare. They don’t get along with each other or other mortals very well and do not form communities among even same-type Genasi. They are described in terms that closely associate them with the themes of their elemental parent. From the Planewalker’s Handbook entry for Fire Genasi:

Fire burns, destroys, and consumes. Lesser creatures are afraid of fire, and so fire genasi believe themselves naturally superior – they are avatars of this fearful, destructive energy. It’s easy to see why those of other races dislike the arrogant and hot-tempered flame lords even more than other genasi. Most (sometimes wrongly) assume that fire genasi are innately evil. 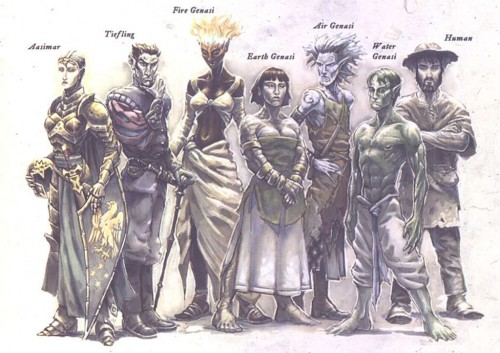 Here we see a fair amount of standardization between the four. They’re all the same size, the same land speed, they all get darkvision, they’re all outsiders, they all have the same level adjustment value. 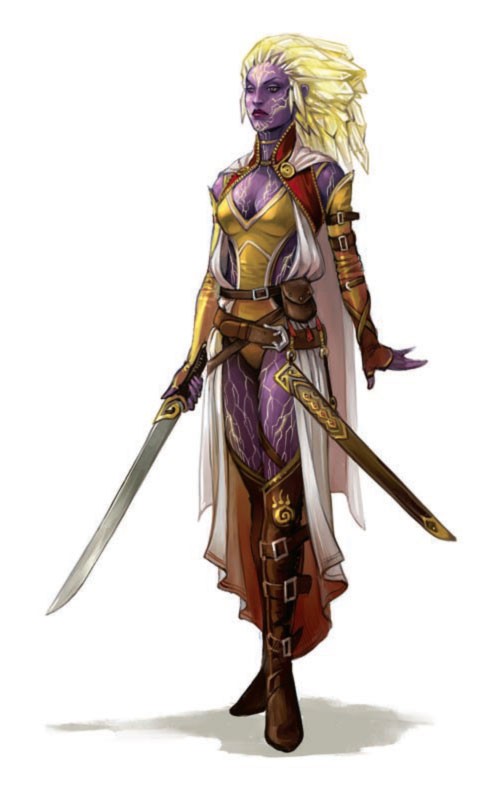 In 4th Edition we see the four separate races turned into one race with five kinds of souls and five manifestations to match. They all get +2 Strength and +2 Intelligence, are medium-sized, have a 6-square speed, with normal vision, +2 endurance, +2 nature.

In this edition they are treated as a species unto themselves with no particular animosity or affinity towards other races. This is a long stretch from their lone-wolf elemental-bastard origin from Planescape, but we can see here that the primary constant between takes on this character concept is change. 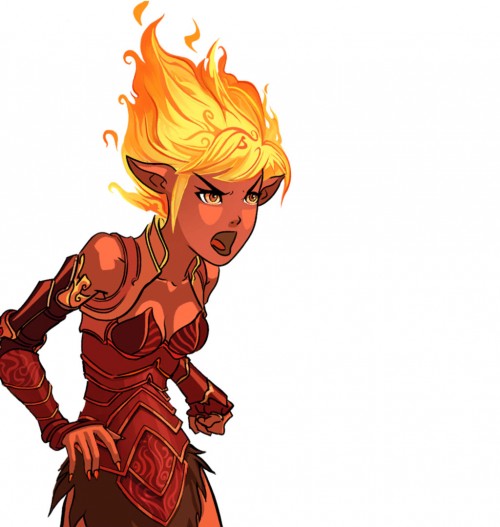 When putting together the Genasi for Type V Dungeons & Dragons, it is not necessary to tie yourself closely to previous takes on the theme considering all this flux. Trying to bear in mind the rough trajectory we’ve seen from 2nd edition to 4th and combining with what we’ve seen from the PHB playable races, I suspect we’ll see something like the following:

Common Features – +2 Charisma. A complete 180° turn from their initial incarnation, but we’re likely to see an elemental bloodline for the Sorcerer class, and the Genasi are a thematic slam-dunk as elementalists. They’ll be medium size because there’s no particular reason not to. They’ll probably speak and read Common and Primorial, depending on how 5e’s take on the Forgotten Realms pan out. They’ll get 60′ darkvision because almost everybody does. They’re giving out darkvision like candy. Pick one subrace.

Subraces – There will likely be more than the original four subraces, possibly the same as 4e, each with its own +1 to a single attribute (Strength for earth, Intelligence for fire, etc), resistance to an associated damage type, and two additional thematically-appropriate minor features. I expect wind-themed Genasi to have a higher movement rate, earth-themed Genasi to have some additional defensive benefit, and so forth.

The main thing we’re going to learn from this first post-release expansion to 5th edition Dungeons & Dragons is what they’ve actually learned from previous experience. Can they keep it in their pants? Has the cancer of character option bloat gone into remission? Or is every DM out there going to have to consider radical surgery and chemotherapy to keep their games off life support?