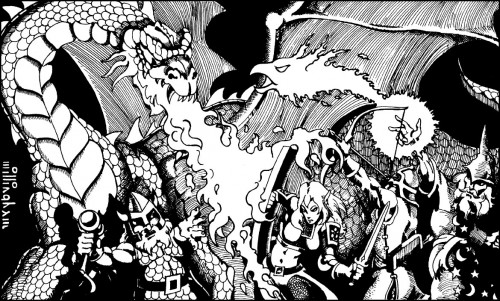 Dungeons & Dragons had a lovely feature missing from Advanced Dungeons & Dragons and some of its successors: morale.  By this I mean a mechanism by which the Dungeon Master could determine if an antagonist was willing to fight it out to the bitter end or choose the better part of valor. A mechanism transparent to the rest of the players and therefore fostering a general feeling of trust in the DM as a fair arbiter of the rules. The evil henchmen didn’t doggedly stick to it because the DM wanted to whittle down your hit points and force you to expend resources. They did so because their basic stats and the dice said so.

An old copy of the Basic D&D Creature Catalogue says you simply roll two six-sided dice and compare the result to the “morale” stat listed for a given creature.  Second Edition used two ten-sided dice and a broader scale. Personally I like to use a twelve-sided die in my Type V campaign. It’s one of the few times that die is used, and my players are learning to associate it with morale checks.  If the die roll is greater than the creature’s morale check, it bugs out.  When is the check called for? Whenever the narrative seems to justify it. A few times I’m likely to pull out the d12:

These are more-or-less in keeping with the rules available from the battered old Red Box of my youth. While this basically works out fine, one big missing factor is a direct translation from the Basic D&D to 5th Edition D&D creatures.  We could compile an exhaustive listing of all the newer monsters and their closest Basic Edition analogs, but the return on investment seems out of whack.  Instead perhaps we rattle off a few well-known creatures and their morale values as points of reference for winging it. Keep the improvisation of stats to prep-time whenever possible, of course.

Modifiers can apply, naturally, such as when there is a particularly charismatic or renown leader present, bolstering an adversary’s confidence. Or if a player character just decapitated the same renown or charismatic leader. Common sense, as always, is welcome when adjudicating rules. Doubly so with old rules home-cooked into new systems. 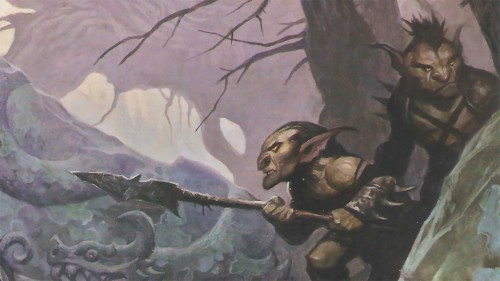 It’s a bit early, what with the Player’s Handbook not having shipped, but with Wizards of the Coast having released a 110-page PDF of the new Dungeons & Dragons Basic Rules and a Starter Set box with a neat litle adventure, we’ve got a pretty good amount of material to get off the fence, set aside our hipster indy RPGs for a while, and return to the mothership for a while.

I understand that it’s cool to disdain Dungeons & Dragons. Perhaps even more so if you are a long-time pen & paper roleplaying gamer. There are myriad reasons for this, ranging from the compelling and legitimate to utterly petty and childish. I don’t care whether you’re ironically or unironically against Dungeons & Dragons of any particular flavor. In my mind, every RPG you play is just D&D with house rules. Some house rules make the game more simple, some make the game more complicated. Many change the core themes of play. But if I were playing with your group, I’d tell my wife and kids that I was heading out to play some D&D with my friends. So when somebody releases a new system under the Dungeons & Dragons trademark I go and check it out. Out of habit, perhaps. Perhaps because I’ve thoroughly enjoyed every version of Dungeons & Dragons so far. At least when I first picked it up. Unlike other brands in the hobby, Dungeons & Dragons never seems to lose its shine and appeal until it’s been played a bunch.

Which brings us to the new & shiny version. From the material we’ve seen, 5th edition is bringing a few interesting new elements to the classic game. In part this is meant to reconcile the play styles of several older editions. This has fans of older versions seeing spectres of newer versions. It has fans of newer versions seeing hobgoblins of older versions. They’re correct in many of the particulars. Aspects of 1st and 2nd edition AD&D are present. Aspects of 3rd edition are present. Elements of 4th edition are there, too. New character background, bonds, and inspiration mechanics even tie in material that I associate with independent pass-the-talking-stick storytime games. Depending on how well the full system ties all these together will have a huge impact on how fun the game will be to play, how well it will facilitate DMs running the game, and how well the brand will fare going forward.

One of the important roles of a Dungeon Master has always been to adjudicate the rules, to decide how they should be interpreted and implemented in a particular story, to create new rules to deal with unforeseen circumstances, and to ignore rules that are deemed counterproductive. This has been the case since Gary Gygax and Dave Arneson killed their first orc. The result is that every Dungeon Master and his group ends up playing a different version of the game than every other group. Each has his own house rules, a kind of informal set of precedents and traditions that help players predict how the story will work. In some groups, magic swords glow constantly. In some group, magic weapons only glow with held by a person. In others, they don’t generally glow at all. I’ve seen play groups general hundred-page printouts of their campaign’s various house rules.

The first house rule I expect to implement is related to the following blurb, as presented in the Basic Rules PDF on page 31:

It is my long-held belief that, in most editions of Dungeons & Dragons, spellcasters have to be handled with care by both the player and the DM. They have to walk a tightrope between being fragile and being stupendously overpowered. A Wizard or Cleric can frequently render other characters superfluous. They can slay many enemies, circumvent many perils, and generally solve most problems and adventurer might face with no assistance from other characters. In a game where the spotlight ought to be shared and every player would like an opportunity to save the day every once in a while, this is problematic. The rule quoted above grants a Wizard the ability to pick any two spells he wants when he gains a level. Depending on the story at hand, some spells have the potential to bypass entire adventures, throwing a wrench into the Dungeon Master’s plans and depriving the whole group (including the Wizard’s player) of hours of entertainment.

A simple solution: remove the free spells when a Wizard gains a level. If you want new spells, look back to the ancient tradition of raiding some other Wizard’s spellbook or scrolls. This can be somewhat problematic if you start a Wizard character; which cantrips and 1st level spells should he have access to? If starting a Wizard at a higher level, the list of commonly-available spells would need to broaden as well.

This can also be an issue for Clerics, who are generally understood to know how to pray for whatever miracles their deities are willing to grant. The Basic Rules PDF grants Clerics access to every Cleric spell in the book the moment they are powerful enough to cast them. They are limited almost entirely to what they player has the foresight to prepare in advance. If we end up finding that Clerics are as potent in 5th edition as they have been in Pathfinder or 3rd edition, it may be a good idea to come up with a “common book of prayers” that any Cleric of a given faith would have access to. This may require coming up with a “researching a spell from scratch” system that I’ll probably base on whatever the rules for making magic items are.

The second house rule will be to modify the combat maneuvers from the Battle Master archetype found in a leaked closed-playtest document and make them the model for improvised actions by anybody, not just a subset of Fighters. I suspect the final published version of the rules will do something similar anyway, so folding this house rule into the proper rules should require a minimum of fuss and muss.

Also, no feats. If there’s one thing I grew to detest in 3rd edition, 4th edition, Pathfinder, and other Dungeons & Dragons clones, it’s feature creep, trap options, and general bloat through the “feats” system. I was tickled to see them considered optional by default. 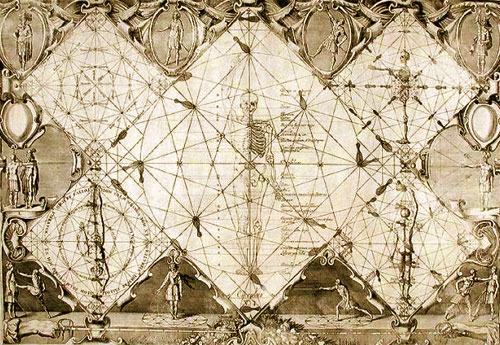 Several months ago I came across an oddly-named archived thread from 4chan’s /tg/ board. It was entitled “Pike To The Dick,” and for some reason I went ahead and read the thing. Turns out there was a pen & paper RPG published several years back called the Riddle of Steel. Its rules were of such a nature that reading a series of posts showing people playing it did not immediately make a whole lot of sense. I was intrigued, and pressed onward, reading additional archives and jumping in on an ongoing thread or two before running a handful of my own.

A little subculture had appeared on /tg/, where instead of the usual neckbearded “elegan/t g/entlemen” prattlin on about Warhammer 40k, Magic the Gathering, and feuding over Dungeons & Dragons variants there were a bunch of (presumably still neckbearded) “fech/tg/uys” with at least a passing interest in historical european martial arts putting on mock battles using this funky out-of-print game system. I got it in my head to try and learn the rules well enough to maybe actually expose my regular playgroup to it once our then-current campaign was at a good stopping point or our DM needed a break.

This is somewhat problematic. Any fair review of The Riddle of Steel as published by Driftwood Publishing would be incomplete without bringing up at least the following points:

All of that should serve to scare anybody away from this game, and any of them may have contributed to its commercial extinction. I don’t really know the backstory on that, but I’m pretty sure nobody went from rags to riches publishing the Riddle of Steel. But if you can look past all these flaws, I find it to be a diamond in the rough:

From the fech/tg/uy deathmatches on 4chan, I was under the impression that this was an exceptionally lethal, brutal system. Having played it for two months straight, I can report that this is only partially true. The Riddle of Steel suffers from overly-effective armor. If you have a character that stands a reasonable chance to take down a knight in a suit of mail with a full-faced helm in a protracted duel, you are likely able to slay an unarmored man outright. I don’t know know what a good fix for this would be, but the stereotype of an armored knight wading invincibly into battle against lesser-equipped rabble and taking all comers is quite possible here.

If there’s a single game that I would love to see get the thoughtful attention of a good editor and a thorough playtest to work out some kinks, it would be the Riddle of Steel, hands down. Perhaps a kickstart project is merited?