Listening to the radio earlier today, somebody was ridiculing Mitt Romney for claiming in a Univision interview that he had given back nearly 50% back to the community, and that his last two years of taxes indicated this. There were a few points made by the radio host that break down as follows:

Well, each of those points has some degree of merit and certain degree of bullshit. Clearly the point about giving back about 40% was him confusing some numbers. Romney would have to have been taking something else into account to get to that number. As for the 50% business, let’s take a look at two fairly naive theoretical situations:

That’s a naive breakdown, as it doesn’t take into account several thousand pages of tax code, personal exemptions and deductions aside from a 10% tithe to the Church of Latter Day Saints. Personal income tax is at a lower rate than corporate income tax. Social security tax (which you have to double-up on if self-employed because normally your employer has to match what you see on your pay stub) is lower than the capital gains tax, but capital gains is taxed on dividends and such, which are after taxes so it’s 15% of the 65% post-tax corporate income.

At the $100,000 scale, corporate taxes don’t look quite so drastically unfair, do they? The same dollar value of goods or services were sold, and the liability-limiting corporate setup ostensibly pays more in taxes. And yeah, it works out to about 50%. That’s what I think of as the theoretical tax rate that Romney’s accountant starts with, and that guy’s job is to game it down in his client’s favor.

Ramp that scale up to, say, $20,000,000 instead and it’s a bit different. At the personal level Social Security tops off a little over the $100,000 mark, whereas the capital gains and corporate tax rates have no cap. Several thousand pages of tax codes and subsidies and other shenanigans render hypothetical situations like this moot anyway.

“How much did you give back?” is a loaded question that can take into account a lot of things. Does the questioner mean just Federal Income Tax? All federal taxes? Does that count park fees? Taxes on airfare? On your phone bill? Does it count state taxes? If so, is it just state income tax, or do property and parcel taxes count? Or minimum usage fees from municipal utilities? There are dozens of variations built into that seemingly-simple question. Playing “gotcha” about the specific number Romney cites about how much of his money he kicks back to society-at-large (as opposed to simply spending on himself, his friends, and his family) serves little purpose in illuminating the public about important political decisions in the next few months.

There’s been a lot of hubbub lately about the threat of the United States government defaulting on its loans and other financial commitments because congress hasn’t raised the cap on the maximum amount it is allowed to be in debt by law. Scary thoughts like Social Security checks not going on out, Treasury bonds not being paid out upon maturity, Veteran’s Administration hospitals closing their doors, and other calamaties have been put forward as possible repercussions of this political fuss. Here is, quite simply, why this shouldn’t be a problem even if Congress can’t get its act together in the next week or so:

From the U.S. Constitution:

The Senators and Representatives before mentioned, and the Members of the several State Legislatures, and all executive and judicial Officers, both of the United States and of the several States, shall be bound by Oath or Affirmation, to support this Constitution; but no religious Test shall ever be required as a Qualification to any Office or public Trust under the United States.

Supreme law of the land means that other laws, regulations, and practices are subordinate to the Constitution, and only laws that are consistent with it are valid. Dig down a little further and you find that it has been amended several times. Of particular interest these days is the 14th time it was amended:

Section 2.
Representatives shall be apportioned among the several States according to their respective numbers, counting the whole number of persons in each State, excluding Indians not taxed. But when the right to vote at any election for the choice of electors for President and Vice-President of the United States, Representatives in Congress, the Executive and Judicial officers of a State, or the members of the Legislature thereof, is denied to any of the male inhabitants of such State, being twenty-one years of age,* and citizens of the United States, or in any way abridged, except for participation in rebellion, or other crime, the basis of representation therein shall be reduced in the proportion which the number of such male citizens shall bear to the whole number of male citizens twenty-one years of age in such State.

Section 3.
No person shall be a Senator or Representative in Congress, or elector of President and Vice-President, or hold any office, civil or military, under the United States, or under any State, who, having previously taken an oath, as a member of Congress, or as an officer of the United States, or as a member of any State legislature, or as an executive or judicial officer of any State, to support the Constitution of the United States, shall have engaged in insurrection or rebellion against the same, or given aid or comfort to the enemies thereof. But Congress may by a vote of two-thirds of each House, remove such disability.

Section 5.
The Congress shall have the power to enforce, by appropriate legislation, the provisions of this article.

Section 4 was meant to distance the Union from debts incurred by the Confederacy leading up to and during the U.S. Civil War, but starts with a clear affirmation that the United States federal government will and must meet any and all of its financial commitments.

In the light of the 14th amendment, the debt ceiling is not valid under Article 6 of the Constitution. If the Republicans want to cut spending, they should past more austere budgets, and shame on President Obama for playing along with the scare-mongering. 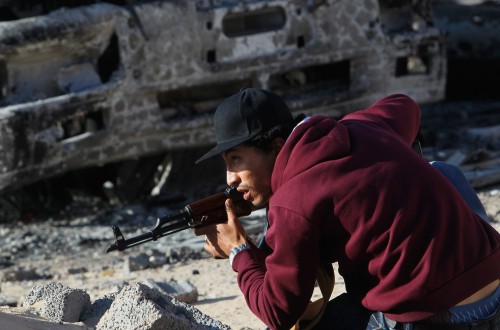 Recently there has been a lot of talk about civilian casualties in the Libyan civil war. Terms like “indiscriminate shelling” are thrown about, painting Muammar Gadhafi’s troops as abject villains. I have no intention of painting them as otherwise, but something keeps coming to mind when I read such reports: why are we only hearing about indiscriminate shelling in rebel-held towns?

To turn this situation on its head, let us look at recent press regarding reform protests in Syria:

Syrian security forces fired bullets and tear gas Friday on pro-democracy demonstrations across the country, killing at least 49 people — including a young boy — in the bloodiest day of the uprising against President Bashar Assad’s authoritarian regime, witnesses and a human rights group said.

49 people killed? That’s terrible. Including a young boy? Those monsters! How could they… wait a minute, hold up there. Who the heck brought a young boy to a protest against a brutally-repressive dictatorship? Against a regime headed by the son of a man that reputedly massacred 10,000 to 40,000 people under similar circumstances in 1982? The Syrian security forces may well be callous, inhuman monsters to fire on a crowd of protesters, but somebody was seriously negligent to let their son attend such a thing. I’m not blaming the victim here, I’m just assigning a fraction of the blame to the people that were supposed to be responsible for him.

Going back to Libya, it seems that rebels have holed up in a close-quarters situation that exposes the local civilians to an undue amount of risk. If they had taken up positions outside the city, Gadhafi’s forces probably wouldn’t be attacking the city. They are using the city and its inhabitants as a shield, in hopes of staying the hands of their adversaries and stirring up the international community against their dictator’s atrocities.

A bit from Al Jazeera on this subject that caught my eye:

Marine General James Cartwright, vice-chairman of the Joint Chiefs of Staff, said the drones can help counteract the pro-Gaddafi forces’ tactic of travelling in civilian vehicles that make it difficult to distinguish them from rebel forces.

Let’s keep in mind that both sides had a hand in this.