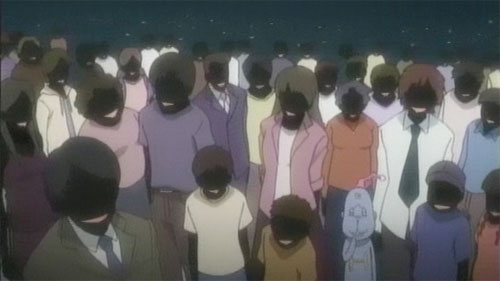 Two years ago I picked up a fan-translated comic called NHK ni Youkoso. I liked it enough that I ended up volunteering my skills, poor as they are, at editing it for the translator. Since then, that person has stopped translating comics, and the title has been sporadically released in English to the tune of some 24 issues. Now it has been transformed into a made-for-television animation by Studio Gonzo, and is being met with some rather positive reviews.

Considering the rather… risqué nature of a lot of Satou-kun’s obsessions, his outrageous fantasies, and occasionally-shocking behavior, I suspect that the television series will be rather seriously toned-down. I also rather fear that the public reception of material like Densha Otoku will somehow result in this series becoming some uber-geek superhero story that it really has no business becoming. Much of this concern is grounded far more in the past track record of Studio Gonzo than anything in particular from the actual episode.

Keep your eye on this one, the production value thus far (a single episode has aired so far) is excellent, the voice acting is good, and the potential of the premise is superb. For those unfamiliar with the original novel (no, I haven’t read it) or the comic, it is the story of a hikikomori named Satou that is struggling to make something of his life. The plot arcs can be expected to revolve around his oscillating embrace and rejection of his reclusive lifestyle, fueled as it is by a his crippling psychological condition. As the story proceeds, he has a number of opportunities to reflect upon his own place in the world and the flawed nature of the people around him. It should be very entertaining all the way up till Gonzo figures out a way to make it self-destruct.