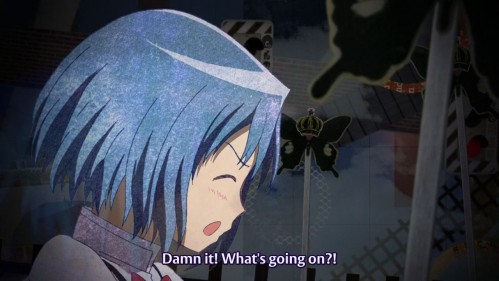 Back in January of 2011 a show that held just about zero appeal to me aired. It had a dog-choking Japanese name that meant nothing to me, was clearly about a pink-haired magical girl and what looked like a cat with rabbit ears hanging out of its cat ears. Why on Earth would I watch such a thing, I thought. So I didn’t. Turns out I was missing out.

Puella Magi Madoka Magica isn’t your father’s magical girl fare. It’s not a lighthearted tale of some Mary-Sue heroine saving the world repeatedly with the power of love and friendship, though it takes careful pains to look like it is. Here we get the tale of Madoka, a first-year junior high student that is warned by a mysterious stranger not to accept any wishes granted by odd creatures, and definitely not to become a magical girl. What an odd thing to we warned about, as there’s no such thing as wish-granting creatures or magical girls so far as Madoka knows. Enter Kyubey, the aforementioned mutant-cat creature that, predictably, offers her a wish as payment for her becoming a magical girl.

What follows is a gritty, sometimes shocking story of hubris, betrayal, tragedy, loss, personal sacrifice, and perseverance. Clocking in at twelve half-hour episodes and of a unique visual style, I highly recommend giving this title a chance.